My 11-year-old nephew is perhaps the world’s biggest fan of the reality TV show “Tanked,” which airs on Animal Planet. The show features installations of unusual and larger-than-life aquariums at various locations across the country. The Las Vegas-based aquarium builders who host the show installed one such aquarium in a New York City Applebees’s, which made the otherwise unremarkable chain restaurant my nephew’s favorite attraction in the Big Apple when he visited last year. The Statue of Liberty was, well, just meh.

The next time he comes to visit us on the Gulf Coast, I know without a doubt he’ll be eager to see the not one, but two aquariums in our area that have been installed and featured on Tanked. The first is at a Pensacola music store, Blues Angel Music. The second, a 403-gallon pirate ship aquarium at the Perdido Key Visitor Information Center, is the focus of tonight’s episode scheduled to air at 9 p.m. CDT. Tune in to see what it’s all about! 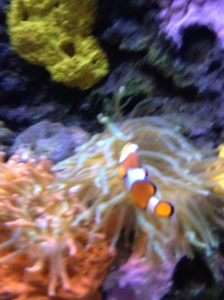 This site uses Akismet to reduce spam. Learn how your comment data is processed.

Search Sand In My Minivan