I remember distinctly the day our local cable company expanded its 13-channel line up to a whopping 30+ channels. It had to have been 1987 or 1988. My sixth-grade self could not have been more excited when that clunky cable box arrived, so I could push a few buttons and finally watch the likes of Nickelodeon and MTV. I’d gotten a glimpse of these networks at the homes of friends and family across town, where modern media had taken root some months earlier. The show I could not wait to watch was, “You Can’t Do That on Television,” a Nickelodeon staple in the 80s. You may remember it as Alanis Morissette’s claim to fame before she became a jagged little pill.

The show originated in Canada and offered a series of comedy sketches for kids by kids. Its legacy today is the green slime that was dumped on at least one cast member’s head in every episode. Whoever said the words, “I don’t know,” was the lucky recipient of the green, gooey mess.

The slime still shows up on Nickelodeon from time to time. I know this because — three children and (almost) three decades later — Nickelodeon has once again become relevant in my life. Paw Patrol, Peppa Pig, and Bella and the Bulldogs may as well be on a constant loop at our house (and those are just the shows I’m willing to admit my children watch!). Note to self: Reevaluate our progress on limiting screen time.

Recently, when faced with booking a hotel near Disney World for a couple of nights, I learned there is in fact a Nickelodeon hotel, where – you guessed it – the slime is still flowing! Complete with character experiences a la Disney and water slides, the Nickelodeon Suites Resort is just a few minutes’ drive from Magic Kingdom and Epcot. It offers shuttles to most, if not all, of the Orlando theme parks, too. It all sounded great on the hotel website, so we made our reservations.

This trip was a surprise for our girls, and when they learned about the hotel they were excited. Unfortunately I only later started reading reviews of the hotel, many of which would have scared me away from the place if I had I read them before booking. There were positive reviews, too, though so we decided to stick with our plans to stay there and hoped for the best.

For the most part, we were happy with our two-night stay at the Nick hotel. Although the carpet and decor were dated, the two-bedroom suite was clean and provided ample space for our stay. At check-in, we received a daily schedule of events and activities, including a daily mass sliming at one of the hotel’s two pools. We made the pool our first stop after we arrived. The older kids loved the water slides, and my preschooler enjoyed splashing around in the large shallow end of the pool. Then came the sliming. People began to gather underneath the giant bucket-o-slime as upbeat music played and an announcer worked to get the crowd excited. A countdown began and the rest is history.

I was videoing the sliming, so can’t speak from personal experience but my daughters said it was fun. They were a little disappointed that the slime was not, well, slimier. It looked to be water with some green food coloring, and it washed right off in the pool. If you want to experience the real deal green slime, you apparently have to pay extra during a special sliming activity in another part of the resort. Or, you can take part in the resort’s daily Double Dare competition. Yes, this is the same Double Dare you watched as a kid, too — another Nickelodeon show that featured frequent slimings. We happened to catch the live stage show the night we arrived. Two families competed, answering trivia questions and daring each other to take a physical challenge. 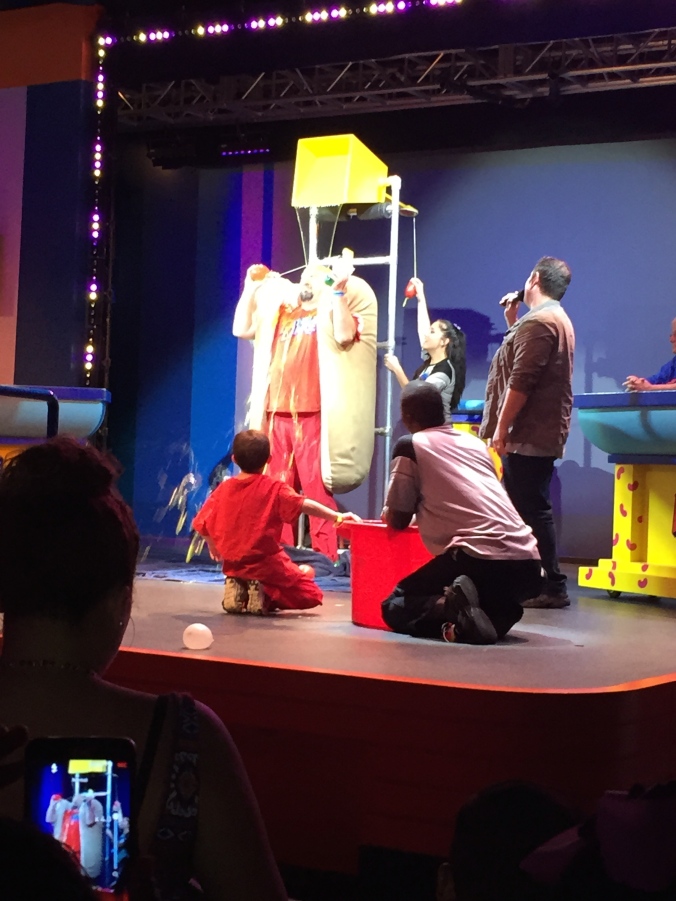 If a trip to Orlando and the Nick hotel was’t enough, I sure hope this kid appreciated his dad donning a giant hot dog bun and having mustard dumped on his head during the Double Dare game!

The live Double Dare show was actually pretty good. Admission to the show was included in a daily resort fee that also allowed us to meet a couple of Nickelodeon characters who had scheduled appearances during our stay. For those willing to pay extra, an arcade, laser tag and character dining experiences are offered on the property, as well. Because we were spending a day at Magic Kingdom during our stay, we chose not to do the activities requiring an additional charge at the Nick hotel. Our four-year-old was happy calling Dora (a recorded message) from the phone in our room, after all.

For a two-night family trip, the Nick hotel was fine. Considering it is in Disney’s backyard, where everything is magical, the hotel could use some updating (Do you even know who Blues Clues or Rugrats are? My kids don’t, yet these characters are featured prominently on the hotel building while current favorites like Paw Patrol and Peppa Pig are nowhere to be seen. Maybe the dated characters are still popular internationally? Not sure.)  The accommodations were not the most comfortable or luxurious option by adult standards, but they were adequate and comparable to other similarly priced hotels we’ve visited off the Disney property. The bottom line: The Nickelodeon hotel provided a fun setting for our stay and the kids loved it. Isn’t that what most trips to Disney World are about anyway?

This site uses Akismet to reduce spam. Learn how your comment data is processed.

Search Sand In My Minivan